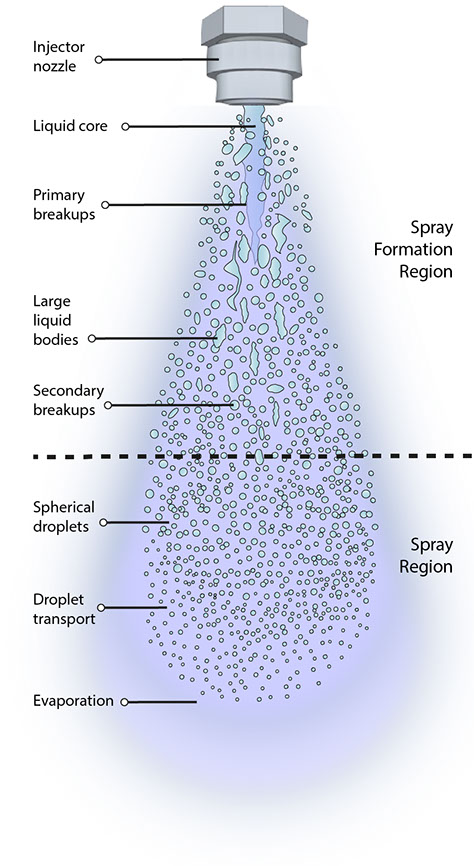 Sprays are complex fluid mechanical structures generated by the disintegration of a liquid sheet or jet into droplets in a surrounding gas.  Depending on the liquid inertia, surface tension, and aerodynamic forces on the jet, several spray regimes are identified .   The  Rayleigh  breakup  regime,  or  drip  flow  regime,  the  first wind-induced regime,  the second wind-induced regime and the fully developed atomization regime. As the atomization  regime  is the  most  typically  used,  the  following  description  will  be based on atomizing sprays.

The  structure  of  a  spray  is  influenced  by  a  large  number  of  parameters  including  the properties of the injected liquid (the dispersed phase), the properties of the surrounding gas (the continuous phase), and the characteristics on the injector itself.  Depending on the operating conditions and on the design of the injector, a wide variety of sprays can be produced. A spray is composed of two main regions:

• The spray formation region is located directly downstream from the nozzle and is characterized by:

1) The presence of a  liquid core - or a liquid sheet - corresponding to the extension of the injected liquid body.  2) The primary break-up where ligaments and large liquid structures are created from the nozzle orifice. This disintegration process is due to gas-liquid inter-facial instabilities which are created by the growth of disturbances during the penetration of the liquid body into the ambient gas. 3)The secondary break-up where the large irregular liquid bodies - created from the primary breakups - breakup a second time into spherical droplets.

• The spray region is located in the far-field region where the flow is fully dispersed and contains a cloud of round and small droplets. Those droplets are characterized by their size distribution, number density and velocity. While the smallest droplets have low velocities and rapidly evaporate, the larger droplets keep traveling further with high velocities and can undergo further secondary breakups and possible drop-drop collisions. At the end of the spray region, injected liquid has fully evaporated. The evaporation rate will, thus, be depending on the temperature of the surrounding air and of the droplets. 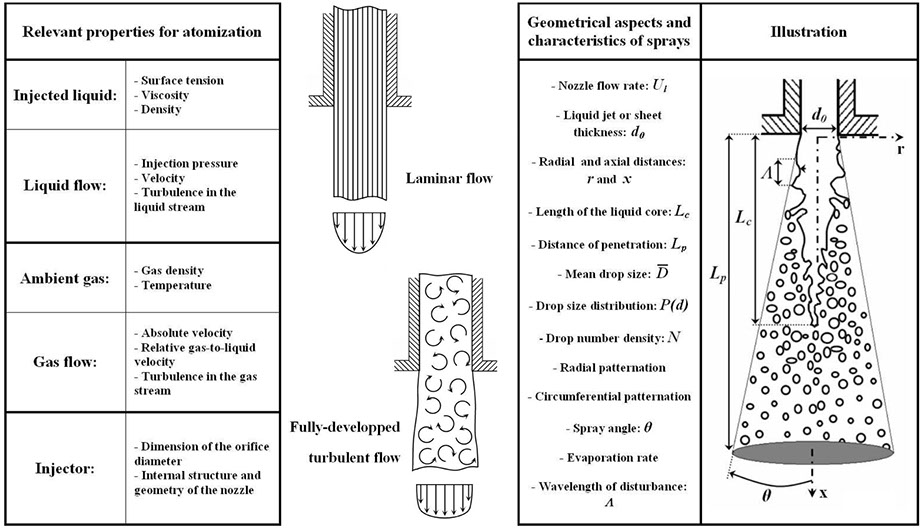 The characteristics of the injected liquid, the characteristics of the ambient gas and the geometry of the nozzle all contribute to the final structure of a spray.  The fundamental parameters of the liquid flow are the injection pressure, liquid velocity and  turbulence  in  the  liquid  stream.   High  pressure  injection  and  high  liquid  velocity increase the formation of instabilities and disturbances at the nozzle exit and increase the atomization efficiency. The viscosity is a quantity that characterizes a fluid resistance to flow.   It is the most important liquid parameter to atomization owing to its effect on droplet size, liquid flow rate and on the geometrical shape of the spray. As liquid viscosity increases, flow rate is generally reduced and the development of instabilities in the liquid core is hindered.  As a result, the disintegration process is delayed and a spray with narrow spray angle and large droplets is produced. Finally, the state of flow at the orifice exit has a direct effect on the quality of atomization. The Reynolds number gives a generally good indication regarding the state of a flow.